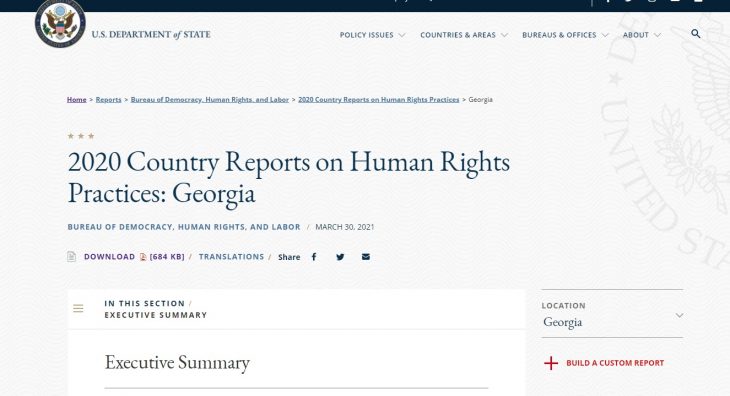 …On May 24, during a weekly Sunday service, the bishop of Marneuli and Hujabi Eparchy, Giorgi Jamdeliani, criticized the mayor of Marneuli, Zaur Durgali, for  renovating the statue of Nariman Narimanov, an ethnic Azerbaijani Bolshevik  writer and revolutionary born in Georgia and active in Baku and Moscow, and  threatened to dismantle the statue. Far-right nationalist radical groups, such as  Georgian March, publicly endorsed the bishop’s statements and began an  aggressive social media campaign. Although the bishop later commented that his  criticism was prompted by Narimanov’s personality rather than his ethnicity, many  local residents perceived his statements as xenophobic.

On May 30, the State Security Service of Georgia initiated an investigation of the  events surrounding the Narimanov statue controversy under the law on racial  discrimination. Civil society organizations noted the aims of the investigation  were not made clear to the public. On July 16, Bishop Giorgi Jamdeliani, Primakov Georgian-Russian Public Center head Dimitri Lordkipanidze, and other  nationalist leaders affiliated with Georgian March held a protest rally in Marneuli  with the same demands. Press reports suggested the protest was followed by a
spontaneous counterrally by young Azerbaijani residents. Police were present to  ensure security.
In addition to political, civic, economic, and cultural obstacles, weak Georgianlanguage skills remained the main impediment to integration for members of the  country’s ethnic minorities. Some minorities asserted the law requiring “adequate  command of the official language” to work as a civil servant excluded them from  participating in government. The Public Defender’s Office reported that involving  ethnic minorities in national decision-making processes remained a problem due to  the small number of representatives of ethnic minorities in the central government.  The government continued its “1+4” program for ethnic minorities to study the  Georgian language for one year prior to their university studies. Under a quota  system, the government assigned 12 percent of all bachelor or higher certificatelevel placements to students with ethnic minority backgrounds. Of these reserved
slots, ethnic Armenian and Azeri communities each received 40 percent (5 percent
of the total), while Ossetian and Abkhaz communities received 10 percent each (1
percent of the total).
The law permits the repatriation of Muslim Meskhetians deported in 1944. The
government, however, closed its review of repatriation applications in 2017…